Last week in entrepreneurial training, I had the opportunity to view an awesome video where our coach, Joe Syverson told two stories.  The first story was about three brick layers doing the same job, which was laying bricks.  One day a teacher came by and saw the men working and thought that he would stop and talk to them. They all looked similar, dressed similar, and all were laying bricks. He came to the first man and asked him, “How are you doing?”  The first man said, “It’s hot out here, and I have to lay all these bricks.”  He went on to complain about his day and the work that he had to do and to tell the teacher just how miserable he was and how unhappy he was to be doing the job he had come to do.  The teacher said to him, “I hope your day gets better.”  He then kept walking towards the next worker.

“Our emotions are a result of our conditioned reaction to life circumstances based on our attachment to an opinion.” Joe Syverson

When he got to the next worker, he said, “How are you doing?  The worker #2 said, “I’m good.  How are you?”  The teacher said, “I’m fine, thanks.  What are you doing?” The worker said, “I’m building a wall.”  He talked about the kind of bricks and mortar he was using to build the wall.  He didn’t seem to want to be too distracted because he seemed focused in building his wall as he concentrated on his work.  The teacher wished him well and went on his way.  As he was leaving, he heard someone whistling so he walked towards the sound of the whistling.

There was the worker #3 working and whistling away, laying his bricks.  The teacher walked over to him.  “Good morning, How are you?”  Worker #3 turned to him with a big smile and said, “I am great!  The sun is shining so I know it’s going to be a great day!  His energetic attitude was so positive that it seemed to emanate from his pores!  The teacher then asked him, “What are you doing?”  The worker excitedly said, “Let me tell you, first, you have to stand way back so you can see it….but I am building a church!  Come, let’s go across the street so you can see it better!”  He directed the teacher to cross the street and they stood there looking at the bricks that he had laid.  With pride he showed the teacher his vision of the church that he was building.  With excitement he pointed out where the steeple was going to go.  With enthusiasm he described how the massive entryway was going to look and how beautiful the hand carved doors were going to look.  By the time he had finished his description of ‘showing’ the teacher his vision of what he was building, the teacher could see the church as plain as if it was physically standing there! The teacher thanked him for sharing his vision, wished him a great day and went on his way.

As the teacher left, he wondered about the three men.  They all looked similar, they all came from similar backgrounds, and they all were doing the same jobs of laying bricks.  Yet they all seemed to react differently to the tasks that they had at hand.  What was  the difference? They had the same lunch boxes, they got the same lunch breaks, they were in the same brick layer’s union. What could it be? What made the difference?

“The quality of your life is directly related to your core attitude.  Your core attitude is determined by the cocktail of emotions you choose to live with.”  Joe Syverson

Joe says one our challenges in life is to realize that we as human beings have a choice as to the emotions that we choose to live with.  I thought it was really interesting when he also said we don’t have emotions, we do emotions.   Our own rules of the emotions we choose to keep  in our lives become our own prison.  Wow. So what I learned is, it’s not the circumstances that happen to us in life that we get our panties all tied up in a notch about, its our reaction to those circumstances.  In other words, in my own prison of emotions that I have chosen to live with,  if what I view from a circumstance is negative to me, my emotional reaction is not going to be good.  However, if the circumstance is in alignment with my prison of emotions, then all is well with the world and I am a happy camper.

After watching the video, the question was asked what was our take away from it. I thought about the three brick layers and  I was enlightened about my own attitude.  I can truly say I try not to ever be like bricklayer #1.  However, I do remember feeling like him a few times on my last job because I was so miserable. LOL.   So If anyone is reading this and you were one whose shoulder I cried on during that time, I truly apologize…:)  I was usually more like bricklayer #2.  I would stay on that job diligently just laying the bricks…whatever the task was I would do that task until it was complete with no thought to it except finishing that task.  It was just a job and someone had to do it. The someone was me. The atmosphere, I felt there was that I was not appreciated but I would do it anyway as long as I was there. I was the walking martyr in my mind…doing the work for the people until I could be released from my JOB prison.  There was no passion in the job for me but I was committed because my word was my bond…and I needed that check. LOL. I was just building a wall.

I strive to be more like bricklayer #3.  I want to be a visionary in all that I survey.  I want to see the BIG picture and be able to show others the same.  I want to master my own visions by being able to not look at just laying the bricks, but to stand back and see the whole church in everything I do!  Can you see your church as you lay your bricks? Stand Back. 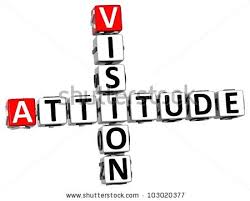 1 thought on “Mastering My Attitude”